There was also something in there about not ignoring two ‘severe weather warnings’ but we did and on Saturday morning we set off over the hill to Martinborough.

In an unlikely turn of events, I had actually been out there on Friday with work for our Christmas Event which took us to Patuna Chasm. After a fun old hike through some fields, making friends with some very big cows (you can take the girl away from the farm, but you can never really take the [now vegan] farm out the girl!) 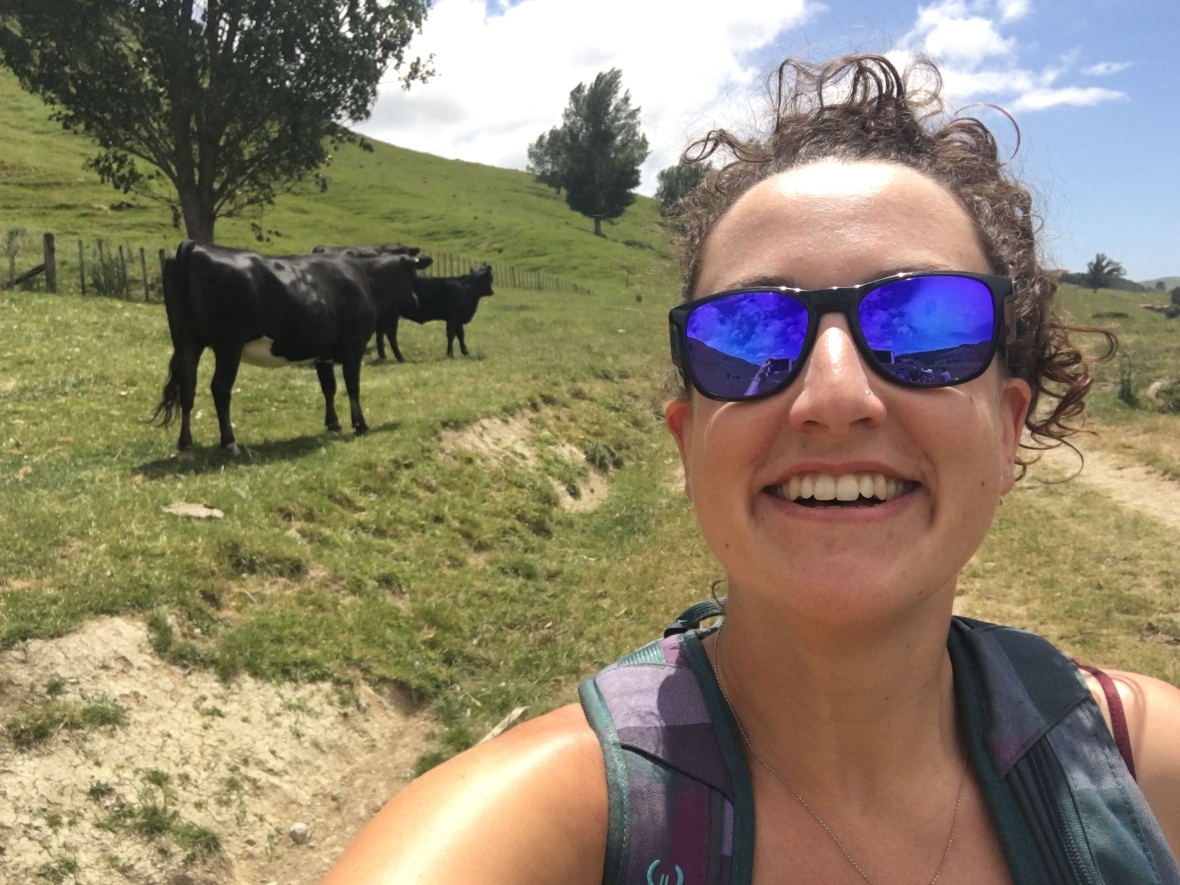 We stopped for lunch in a pretty cool ‘wave’ rock. I’m sure it has a proper name, but I don’t know it…

Then trekked down the hillside, swung on some ropes jumanji style to get down a rockface and eventually made it to the river bed. No safety harness, hard hat or uttering of a health and safety form around. Almost like we’re not in the UK.

Made friends with an eel and had to wade through some pretty chilly knee deep water to get to the waterfall at the upper end of the river, it was pretty cool. 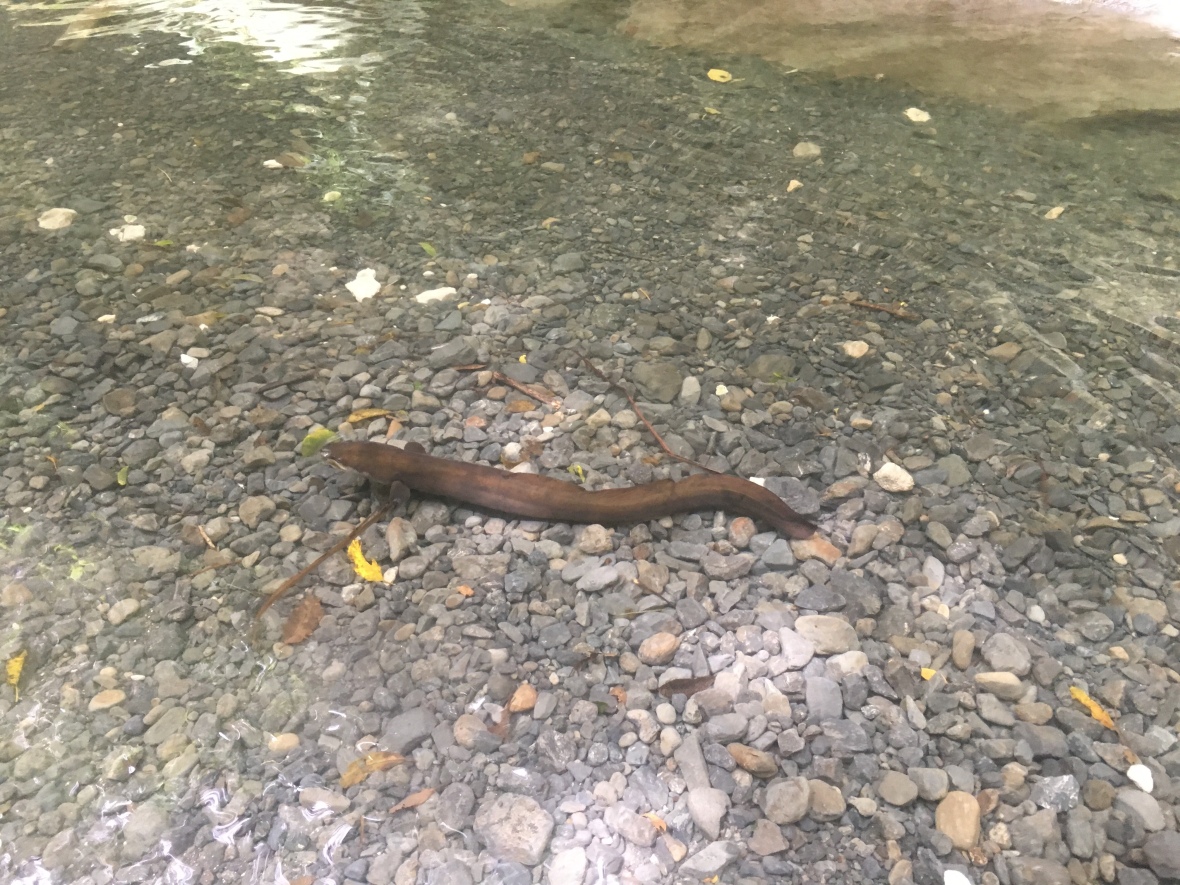 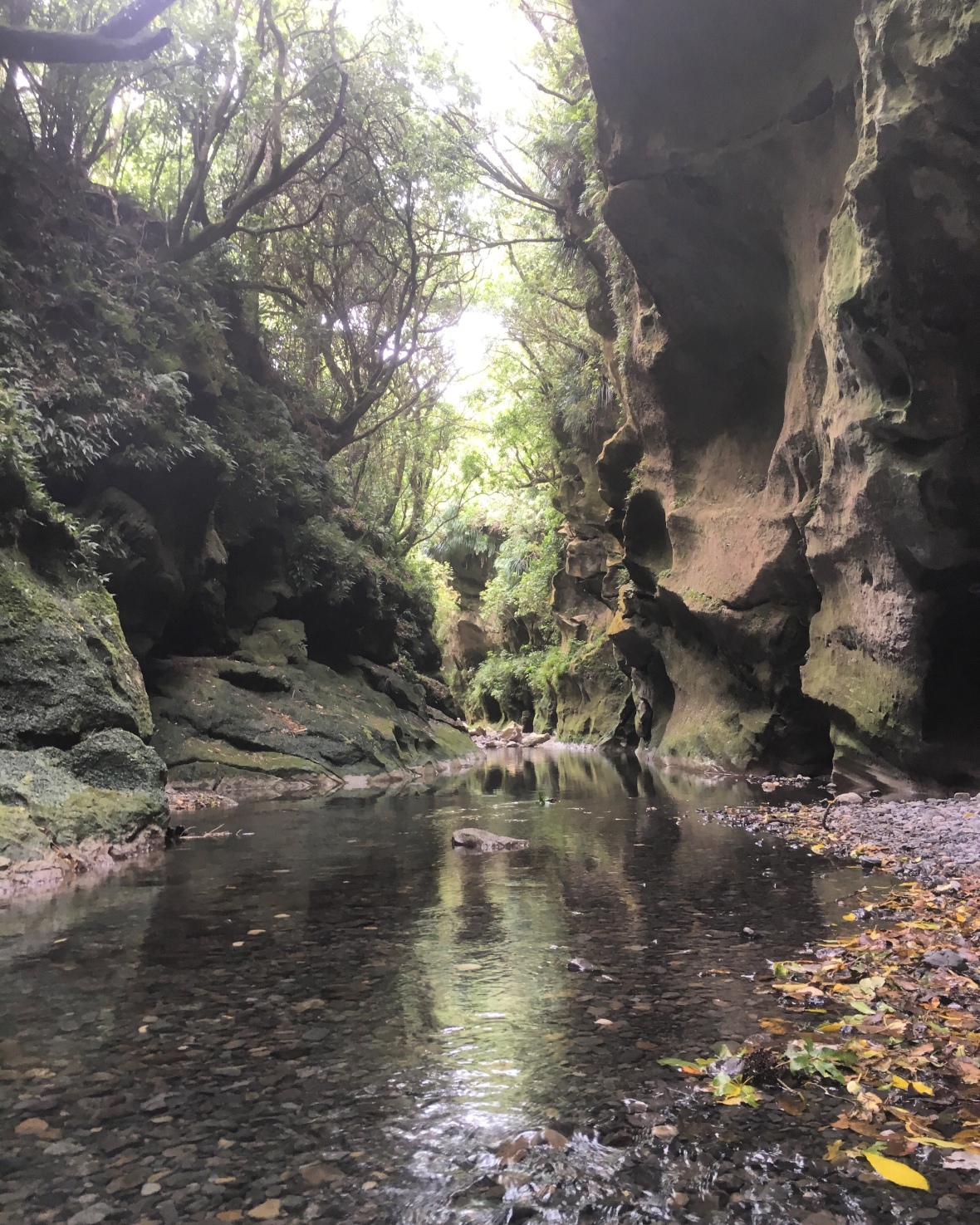 Then wading a good few km downstream I was incredibly grateful for long legs, whilst some were nearly up to their bums I just had to go on tip toes and kept my shorts dry!

We also stumbled across a lovely little lamb which I assume had fallen down the cliffs as it really didn’t enjoy being in the water and there was no other way it got there. 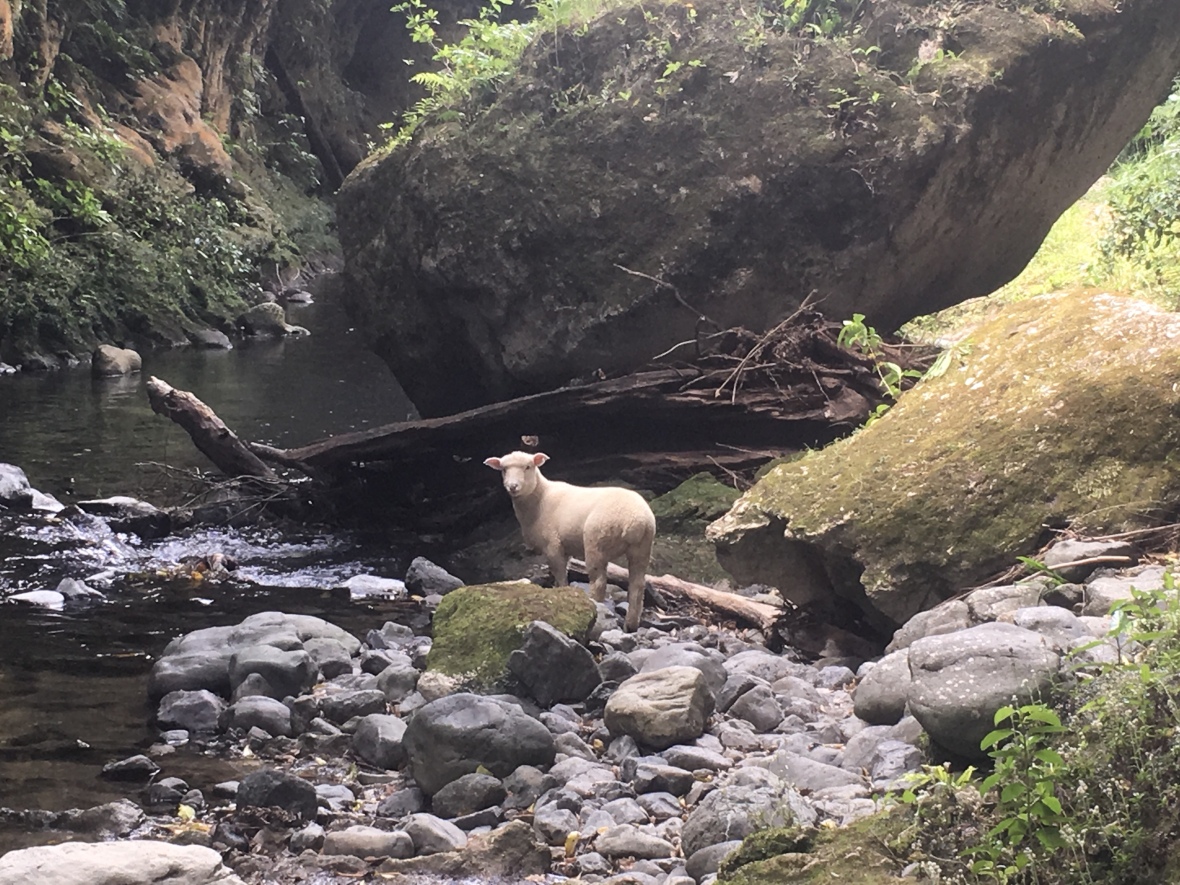 Back at base, I made more four-legged friends… obviously… 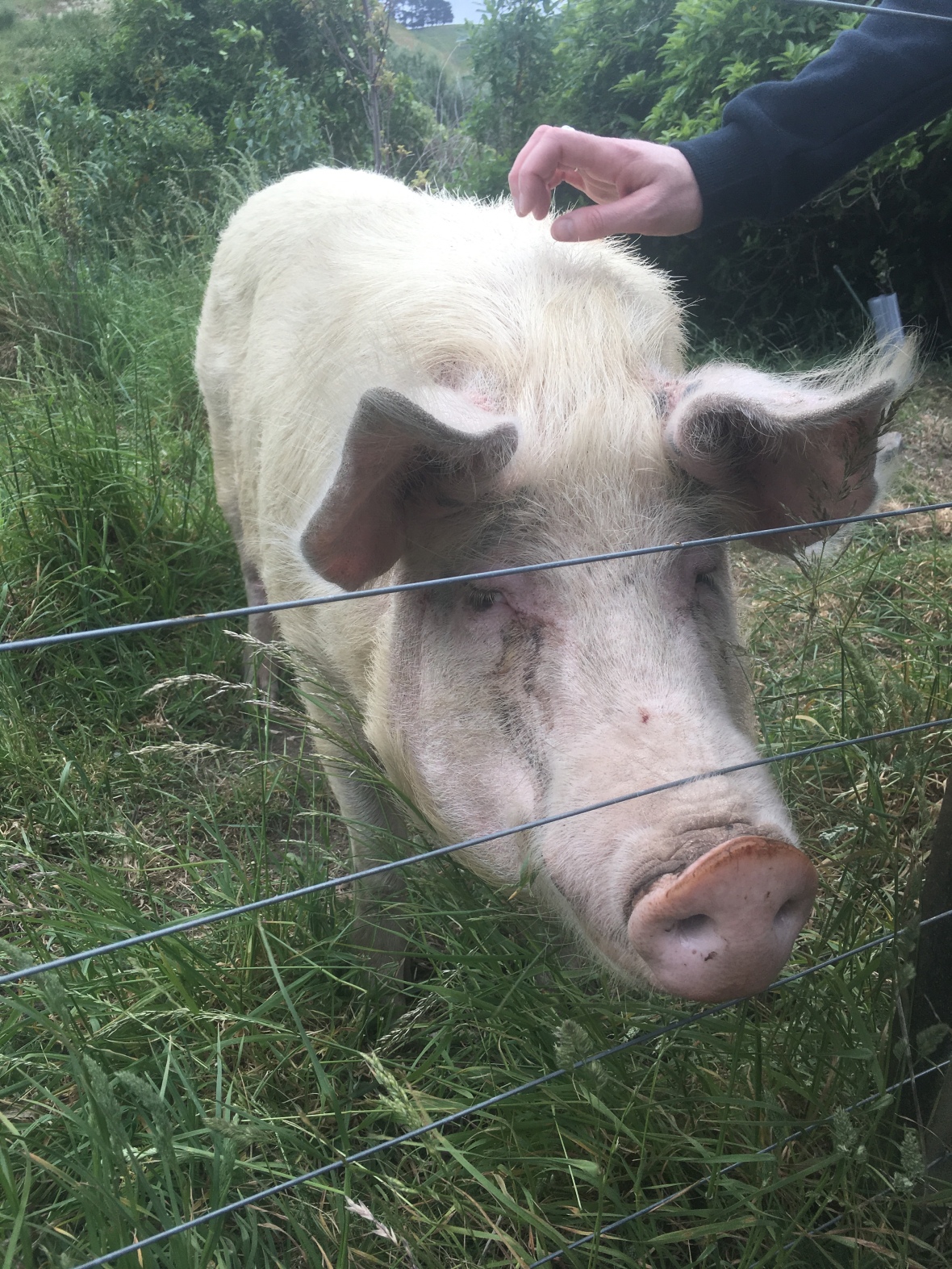 Saturday morning, with bike-packing bags filled and various conversations of “you don’t need that many clothes” “I don’t care, I’ll carry them” “have we got food” “have we got snacks” “can you tape my shoe tight because I’m a massive melon brain and broke it last week and we forgot about this” and “that looks new? Are they new? Have you been buying more bike bits?” (The answer was of course yes) we set off.

Dear lord, it was a 40ish km head wind and boy did it feel like it. Yuuuuuuuck.

Thankfully we found some reprieve from the wind under some trees, then, found possibly one of the greatest things Wellington has to offer. Everyone, meet Peppy the Alpaca

We wiggled our way up the mountain, playing a game of “can you just leave us alone” with the rain and ‘cat and mouse’ with a family who had three wee kiddos with them, the smallest must have been no older than 5? Certainly made me feel bad for moaning about climbing. We went over loads of troll bridges (did anyone else’s parents used to tell them trolls live under bridges or just me?!) and through loads of tunnels. Apparently trying to hold your torch in your mouth along with your sunglasses and hold the handlebars is a skill. A skill I certainly haven’t mastered! 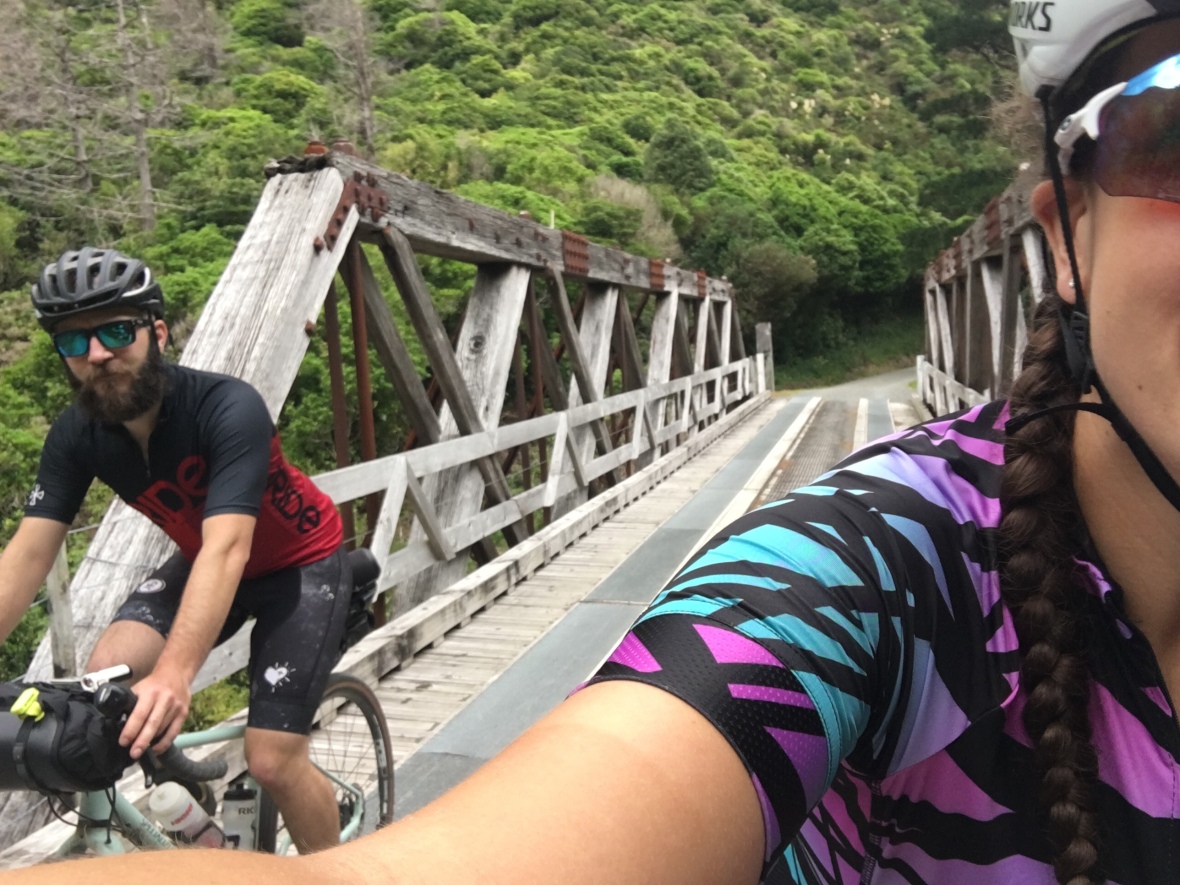 FINALLY we made it to the summit, but with an insane tail wind we cracked on

A long old descent down and some pretty bumpy Kms we finally made it to Martinborough. A quick shower and back into town to grab some well earned pizza and it was deeeeeelicious (to be fair at this point plain toast would have been bloody tasty I was so hungry and tired!) 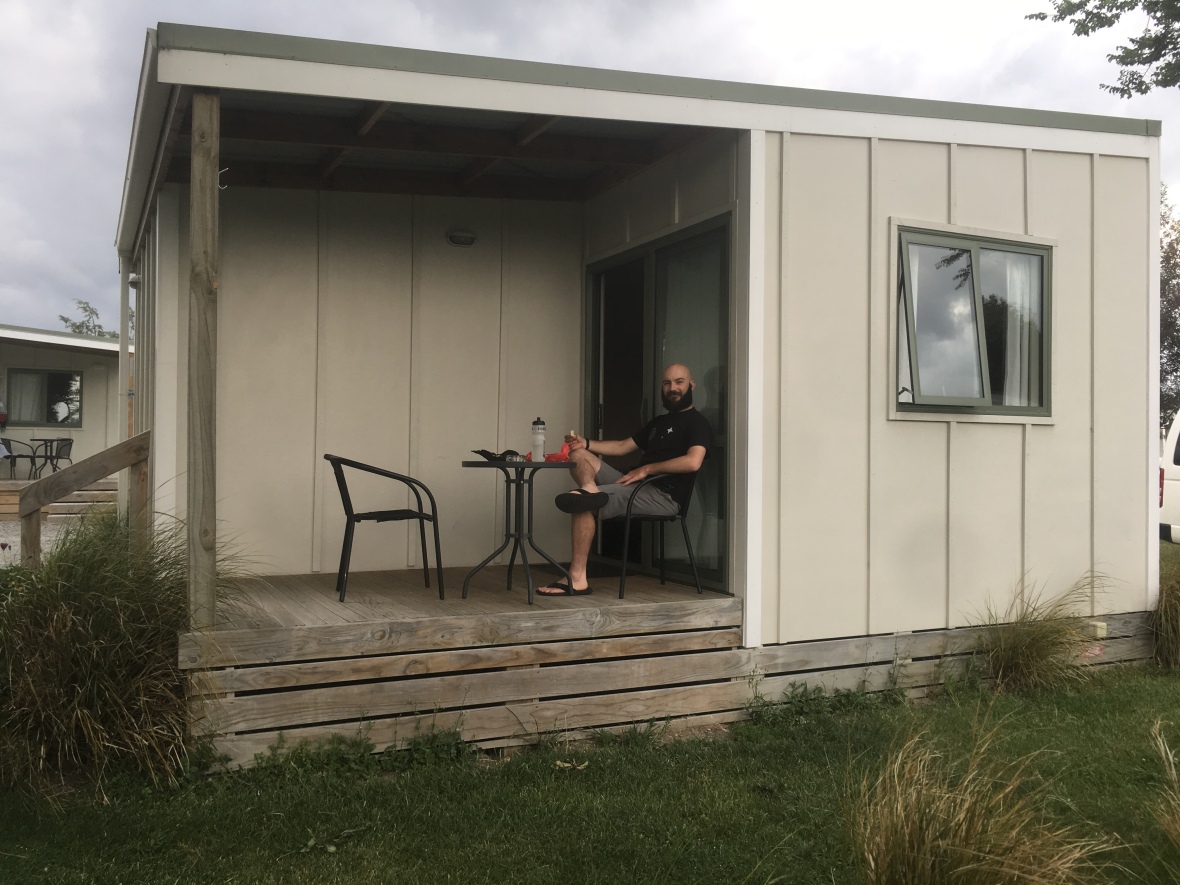 James made another four legged friend.

Sunday morning we were woken up by the rain. And more rain. And even more rain. Eventually it eased up so we dashed to a local cafe for some breakfast.

Once at the cafe a friend in Wellington alerted us to the fact there are 2 severe weather warnings, the main highway in and out of Wellington was shut due to flooding and land slips, it probably wasn’t the greatest idea ever to be cycling. So we jumped on our bikes and set off.

First cause for concern was a crossing that yesterday wasn’t even damp, today was over knee deep! It was a socks off kind of event to try to keep as dry as possible

Climbing back up to the summit with slightly sore and wet, everything, we decided to stop for a cup of tea and watch the wind howl through and boy was it going for it! The perks of carrying everything with you is you can stop whenever you want!

Eventually making it back down to the Hutt River it was clear to see it had been raining, the top picture was yesterday taken in a ‘ah that’s nice’ kinda way, the bottom picture was taken today in a ‘jeeeeeepers, what on Earth has happened?!’

We were that wet our shoes had filled with water, although we had overshoes on. My rain jacket had proven itself not to be very waterproof about 10 minutes in which was most unhelpful however a merino bade layer was a good option that somehow kept me warm.

It was when we stood up, then sat back down on the saddle again and would could feel the water squelch from the seat down your legs that you knew just how wet you were.

At one point we got off the cycle path and onto the road thinking it would be quicker. That thought didn’t take into account land slips, having to cycle around them and avoid idiot drivers who can’t see cyclists with bright clothing and lights on so back to the shared path it was.

In the end we just started laughing, the water was so deep as you cycled through puddles you’d clean off the mud and replace it with fresh mud/water. Cycling through the puddles was kind of nice as they were warm, so warmed up your socks a bit.

The phones went away in the ‘waterproof’ bag so there’s no more soggy pictures but we eventually made it home. Peeled off our wet kit and plonked ourselves on the sofa only to be greeted with sunshine about 20 minutes later?!!! Sod’s law eh!

Having burned around 2,000 calories each day, it’s bed early and a good snooze. I’m still not quite sure how we’re going to be able to do double the distance everyday for a month in March but still.