So, the title of this blog will probably mean very little to most of you. To fans of The Chris Moyles show, from back in the day, it may mean a little more.

Well, anyway, we are listening to old radio shows back from March 2009 where Whoopi Goldberg was on the red carpet at an event and a BBC reporter was trying to get her attention, so was shouting – basically it was very funny and has become a bit of a joke whereby we just holler ‘Whoopi’ and then also decided to name our lovely new van Whoopi too!

WE HAVE A VAN/HOME PEOPLE!

Meet Whoopi, our new ride. We were convinced she was going to fall apart before we even left the forecourt, but she’s still going strong! 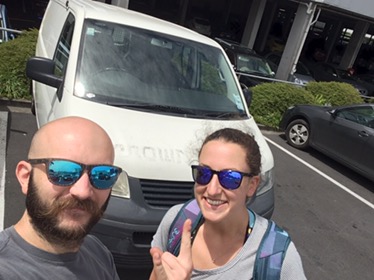 (Looking at that picture I was still in my pyjama top – think i was too excited to get out of Auckland and get out of shitty hostels!)

We spent what was supposed to be the next hour, but turned into 5 (after getting distracted buying running shoes and fun coloured pants – all the necessities) buying a duvet, pillows (James is very particular about his pillows..!) finding bed linen then realising that we had brought a double duvet and should have really got a queen, back to the duvet shop to change it to a queen, then back to the linen shop to buy the queen bed linen only to realise they didn’t have the one I wanted in a Queen (thankfully James found it, or there may have been tired tears!) then off to Torpedo7 to buy a blow up mattress and on the road to Rotorua we went!

It was a little bit cosy…!

Or should we call it Rain-torua as it didn’t stop raining the first 4 days of being here.

We firstly became well aquatinted with our local hardware stores and for the first few days that’s all we did. Traipse around pricing things up, get bored, get sleepy, get hungry leave, go to Countdown (the supermarket) buy food, cook food – ah well that would be fine if the campsite we were staying at had pots and pans, we had naddah, just some rice, chicken and veg and two very hungry bellies. So we had to drive back into town and found ‘eat street’ and an Indian place that was still serving and had dinner.

The journey home was a little creepy, James thought we were getting followed (and a car was behind us) then just disappeared. We pulled into the campsite and moments later a car drove up to the barrier but couldn’t get in. James was spooked and creeped me out and we didn’t stay there again!

The following day was filled with……. another trip to the hardware store. And a trip to Taupo and hour down the road to Torpedo 7 (outdoors store) to buy a gazebo and doors. However when we got there, they had the gazebo but no doors unlike the website had said. Bummer. It was 4pm so too late to drive an hour back to Rotorua then another hour and a half in the opposite direction to Hamilton to find the doors – that treat was reserved for the next day. However we phoned and purchased them so we had the last set in store.

The following morning we pootled off to Hamilton to pick up the gazebo doors, just as we were leaving the shop and the lady says, oh hang on these are 3×4.5m and you want 3x3m

“We don’t have any of them…….. ” after calling the warehouse and organising some to be brought round to the shop (code for there’s some here but I can’t see them) we were sent off for an hour and found an old school CD shop. Which just so happend to have a 4 disk CD of the best of the 80’s (at a bargain price of $30) and a double sided Lion King soundtrack we went back to the van to eat some lunch and wait for the doors to ‘arrive’.

All excited to get back to the van to play it and the CD player is broke and we can’t get the Amy winehouse CD out.

Cue James fixing the CD player with a couple of bike tools and the car keys and I sat there eating an unpeeled carrot because we had yet to buy any cutlery. 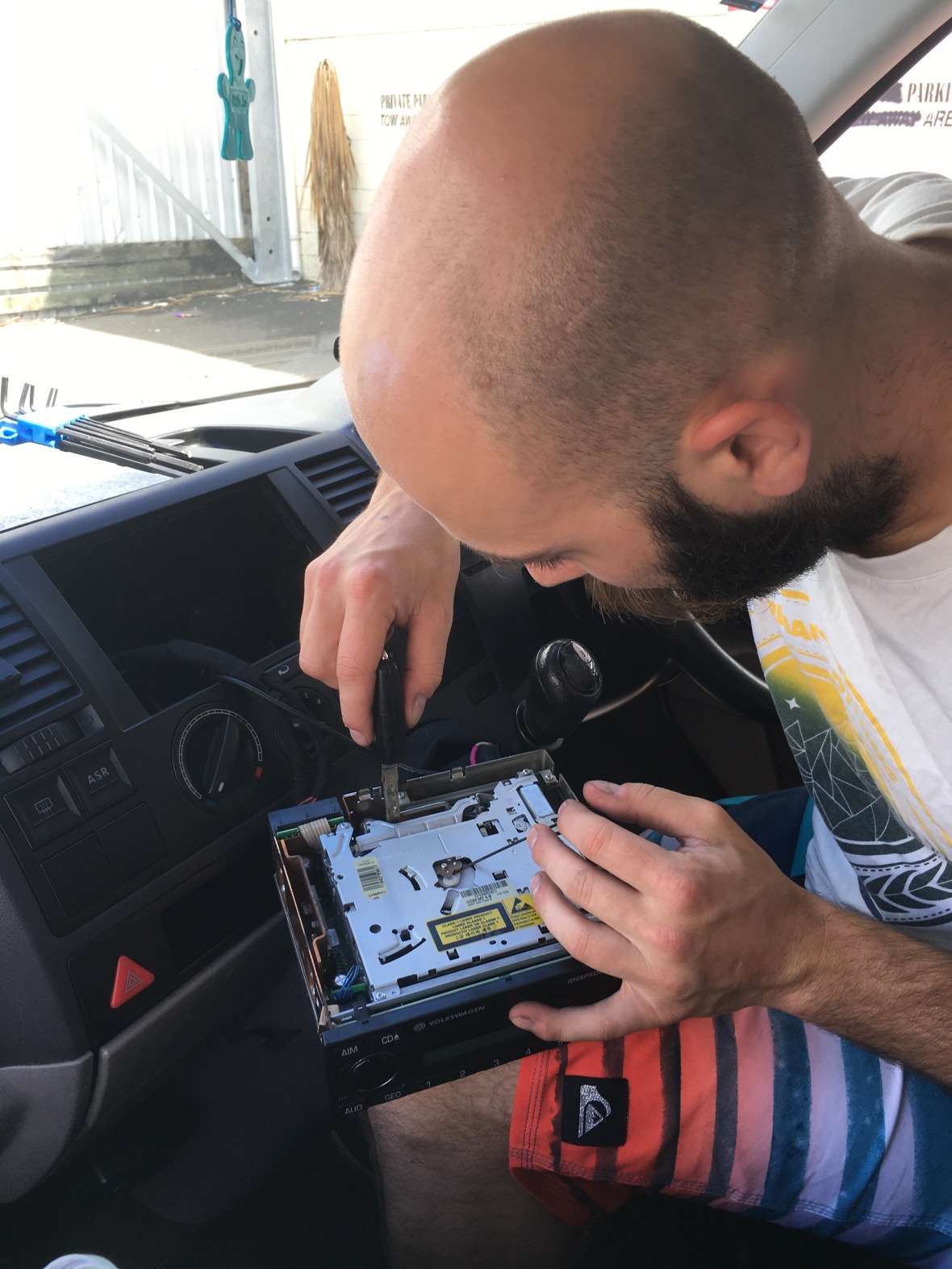 We stopped off at the supermarket to get some pots, pans and cutlery and head back to Rotorua, which was for all of 15 minutes sunny – so James could build his bike! 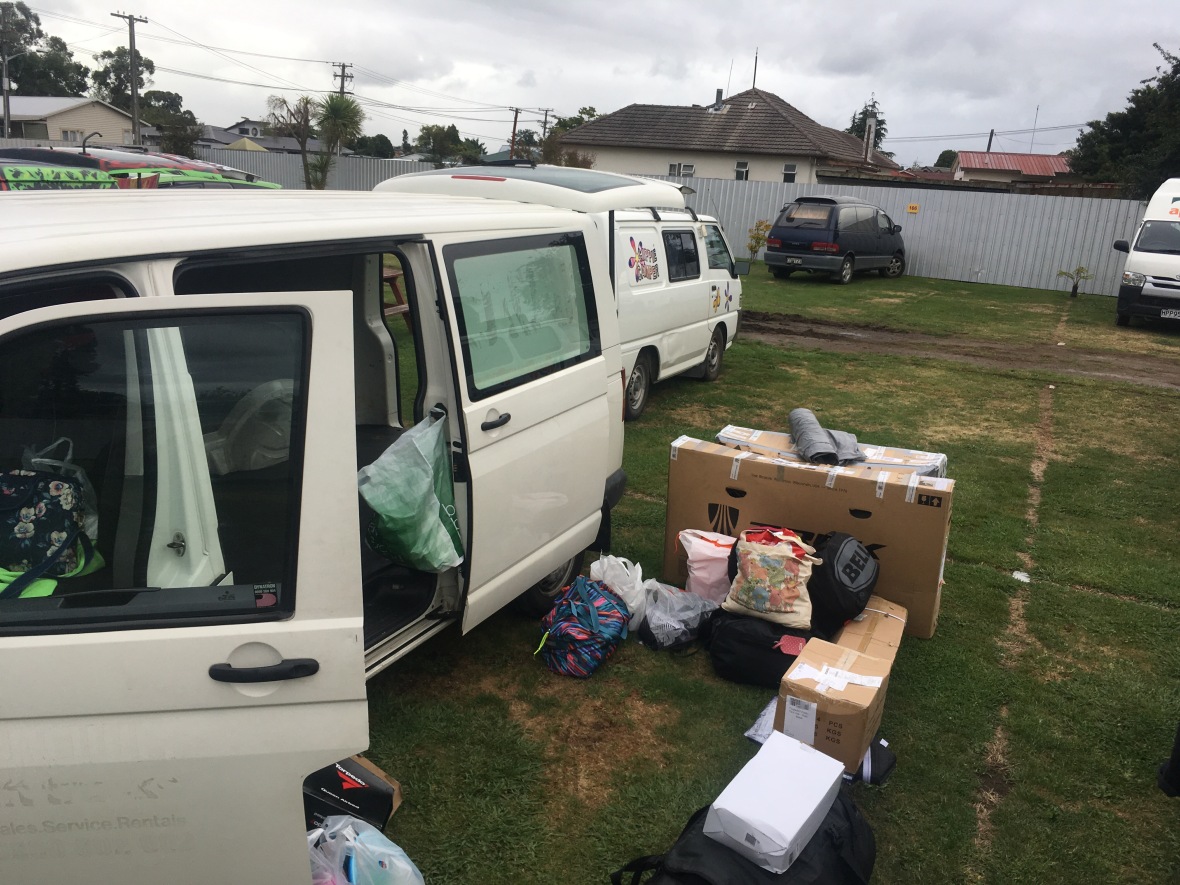 With bikes built and good weather forecast for the following day we went off to bed!

The adventures of Whoopi, James and Victoria continued….