Road trip time meant one of two things,
1, a boat trip across the water to the South Island or 2, a trip back to Rotorua. With it being such a last minute booking the boat was going to cost us $700 wouldn’t leave until very late that evening and we would have to return to Welly on Easter Sunday which was a bit of an expensive trip for not a lot of time,

Or the 2nd option a 450k drive back to Rotorua. Rotorua it was then!
It felt like we were going home, and was quite exciting… for the first 300k… then I got bored of driving, it got dark and conditions got pretty damn shit! Heavy rain, fog and dark. My driving hell.

We stopped off at the Indian Star for a takeaway which was possibly the best thing I’ve eaten in a long time, the garlic naan was MAHOOOSIVE!

After dinner we checked the forecast to plan our days riding. It was not good news. We hadn’t seen that a cyclone was on its way to us and we were forecast utter crap weather all week, only was it going to brighten up on Tuesday when we had to be back in Welly. Bummer.

For once, the forecast was actually correct and it chucked it down!
We went down to the lakefront which is usually quite a nice area, however not today, it was cordoned off and flooded.

In trotted THE coolest couple I have ever seen – LOOK AT THEM!!! 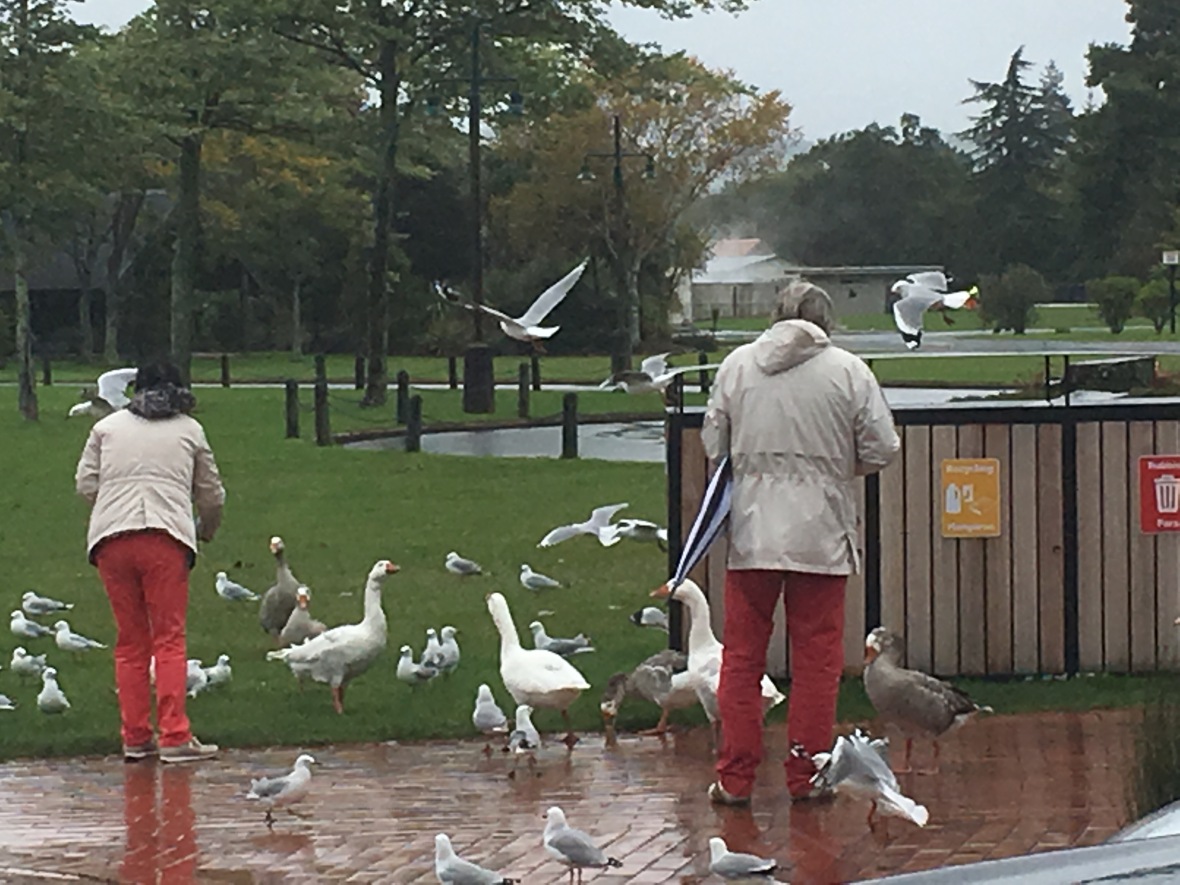 With Cyclone Cook well on its way the weather got even worse and just didn’t stop raining, so tea, biscuits and stupid Snapchat filters were required. James was clearly impressed by my hyperactivity having been cooped up for the last few days

With the weather forecasters predicting Cyclone Cook was going to be the worst storm for 50 years we, in true British tradition, parked the van and made a cuppa and went inside. Not really a lot else we could do!

The forecast was looking more and more grim with winds of 150k heading our way and 40-50ml more rain we prepared as best we could (having a supply of water, gas and food)

…. Little did we know, the cyclone would blow over whilst we were inside playing table football and were none the wiser that anything had happened!

The following morning, the sun shone as if nothing had happened which could only mean one thing – fresh air and exercise!!!!

​​
We went for a walk around a geothermal area. As the sun was out I thought I’d put my flop-flips on. Rookie error, the paths were a wee bit wet so I ended up squelching my way through puddles. Felt like being a child again and my toes squelching through cow pat. Those were the days! 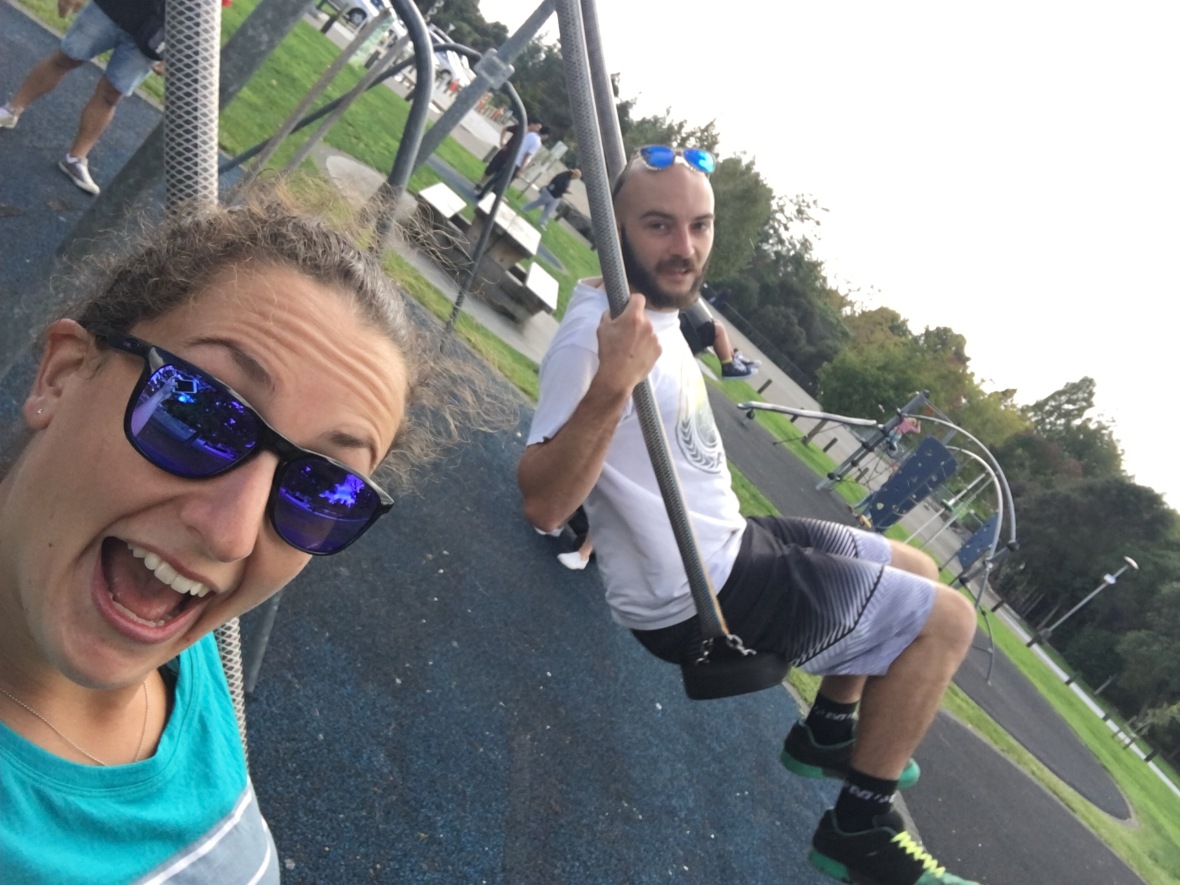 We then decided to go on a little adventure out of Rotorua further North to a place called Okere Falls which I thought would be pretty fun considering all the rain we’d had with Cyclone Cook.

And off we tottered for a little walk, via what had been described on a little trip advisor style app we use as ‘the worst toilets in New Zealand’  – the person who left that review obviously hadn’t stayed in the grotty hostels we used in Auckland!

The water levels were indeed very high, with a few trees down and land slips and the water was so ferocious and really quite mesmerising.

As the area used to be used for mining, in 1904 (I think) a stairway had been built down to the water level which gave an awesome up close view of the river.

After being annoyed by a bratty small child running around we continued our walk up to the ‘trout falls’ where we saw a local canoeist come down the falls.

When we got back to the van, the couple at the car next to us were frantically walking around on the phone – turns out their car had been broken into whilst out walking and thieves had stolen the ladies handbag with her reading glasses and house keys. Great one dip shits! Unfortunately they weren’t from the area, it was Easter weekend so no garages were open for the next 4 days and more rain was forecast so they were pretty screwed.
With another dry day forecast on Easter Saturday it was time to get back on two wheels, after my first New Zealand parkrun. For whatever reason (people over here are MENTAL) they do park run at 8am

Usually the course goes around the lake, but due to flooding of the lake it was moved, helpfully to where we go biking! So with James still tucked up in the back in bed we set off.

Park run at home is 1 1/2 times around the cycle track at Quennevais, down the railway walk a bit, up the railway walk a bit and boom your 5k is done. Not particularly hilly and mostly on tarmac. Not here’s it’s not… no no, started off in the car park and before I’d even made it over the bridge into the forest I’d squelched in a puddle and twisted my ankle, but off we trotted one muddy shoe and all…. having only run in Whakawerawera forest once before I knew the one hill I’d been up, everything else was new, probably a good thing, had known what was coming I would have head back to the van and gone back to bed! At one point I was on my hands and feet scrambling up a muddy hillside before (not seeing) a root tripping me up, landing like a sack of Easter eggs on the floor in a heap and grazing my ankle, shin, knee and somehow my bum (through my shorts!) however I continued. Caught up to a man named Dave who also didn’t know where he was going, which was evident when I followed him left which took us a mile in the wrong direction when we should have gone right! No PB’s were gained today! 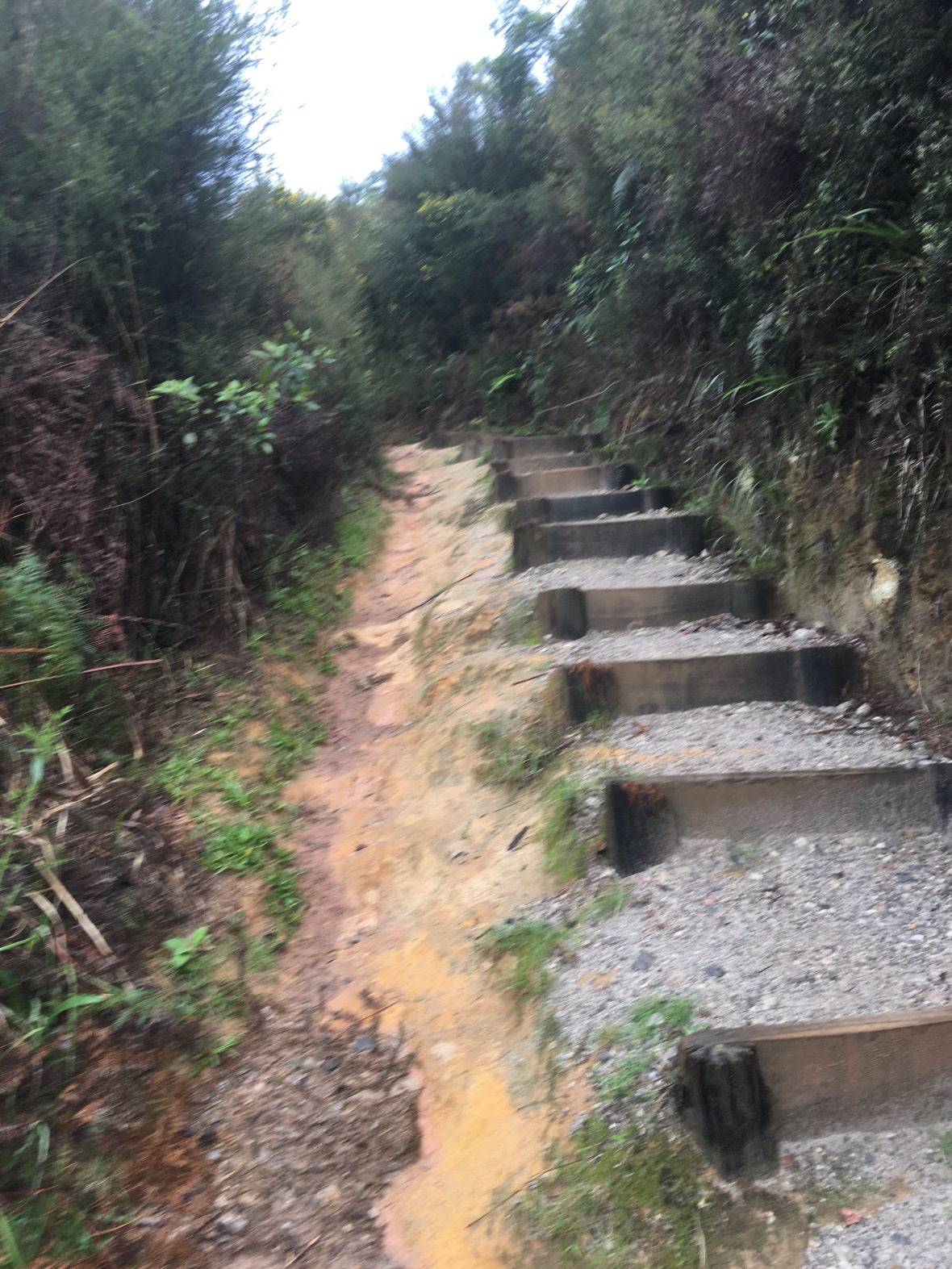 After coming back to the van to be greeted by a cup of tea and James laughing at my inability to run, a quick bite of scrambled egg whipped up in the van before heading out on the bikes for a day in the sunshine. Thankfully we still had some unused uplifts so I didn’t have to peddle up to the top each time! 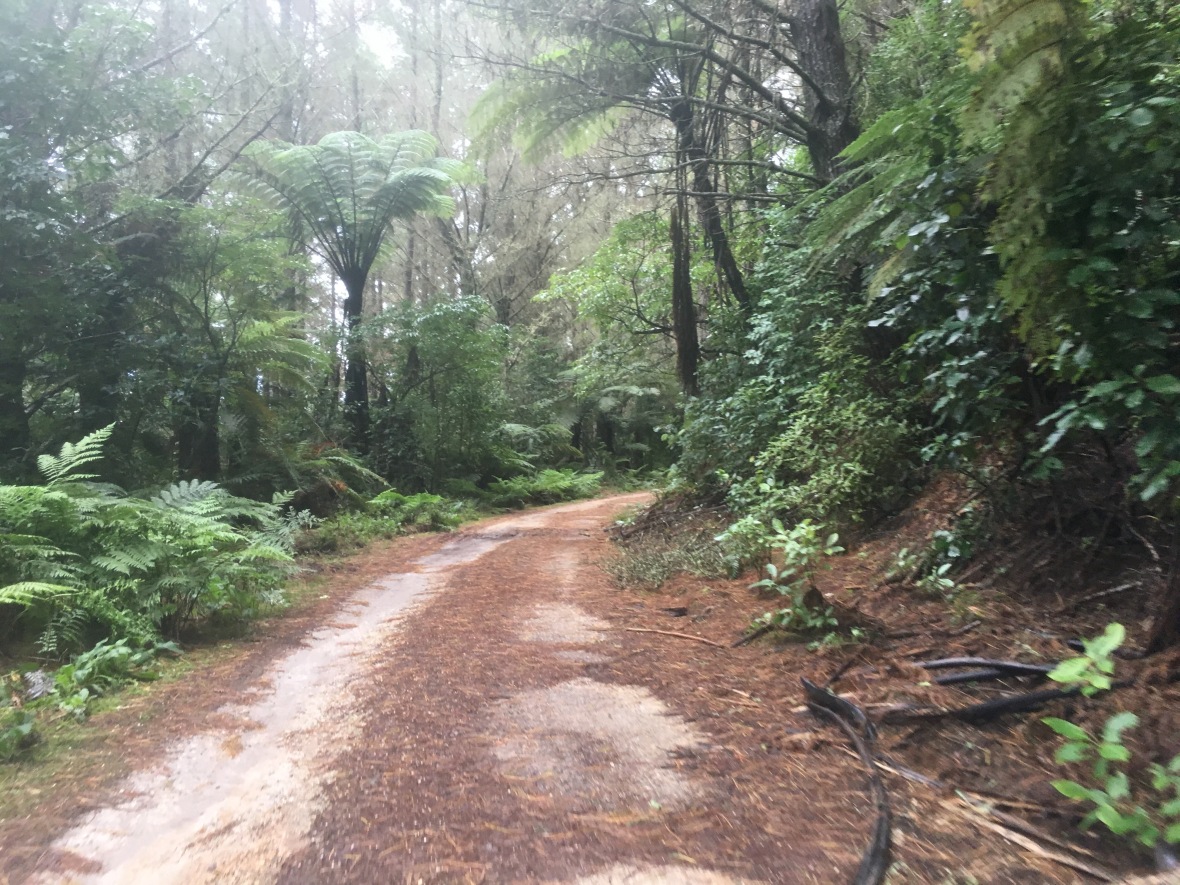 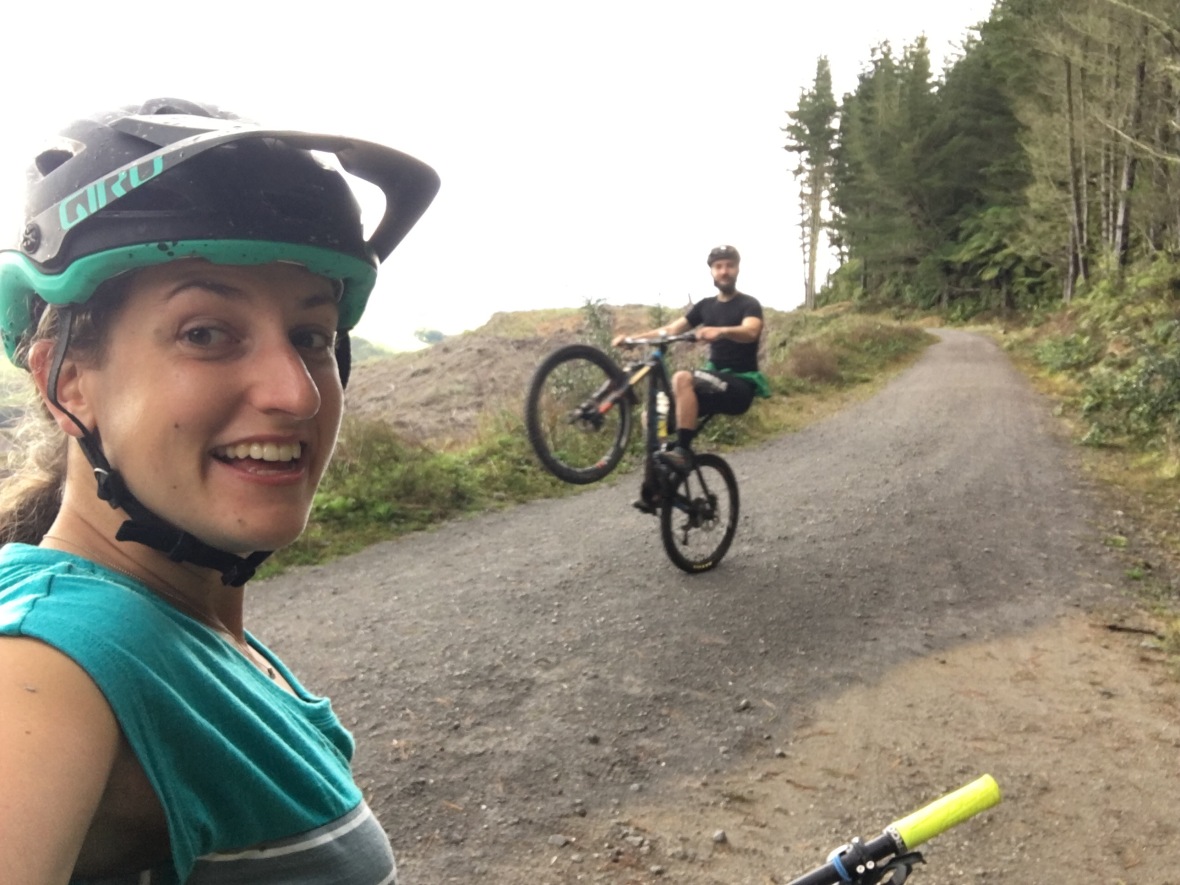 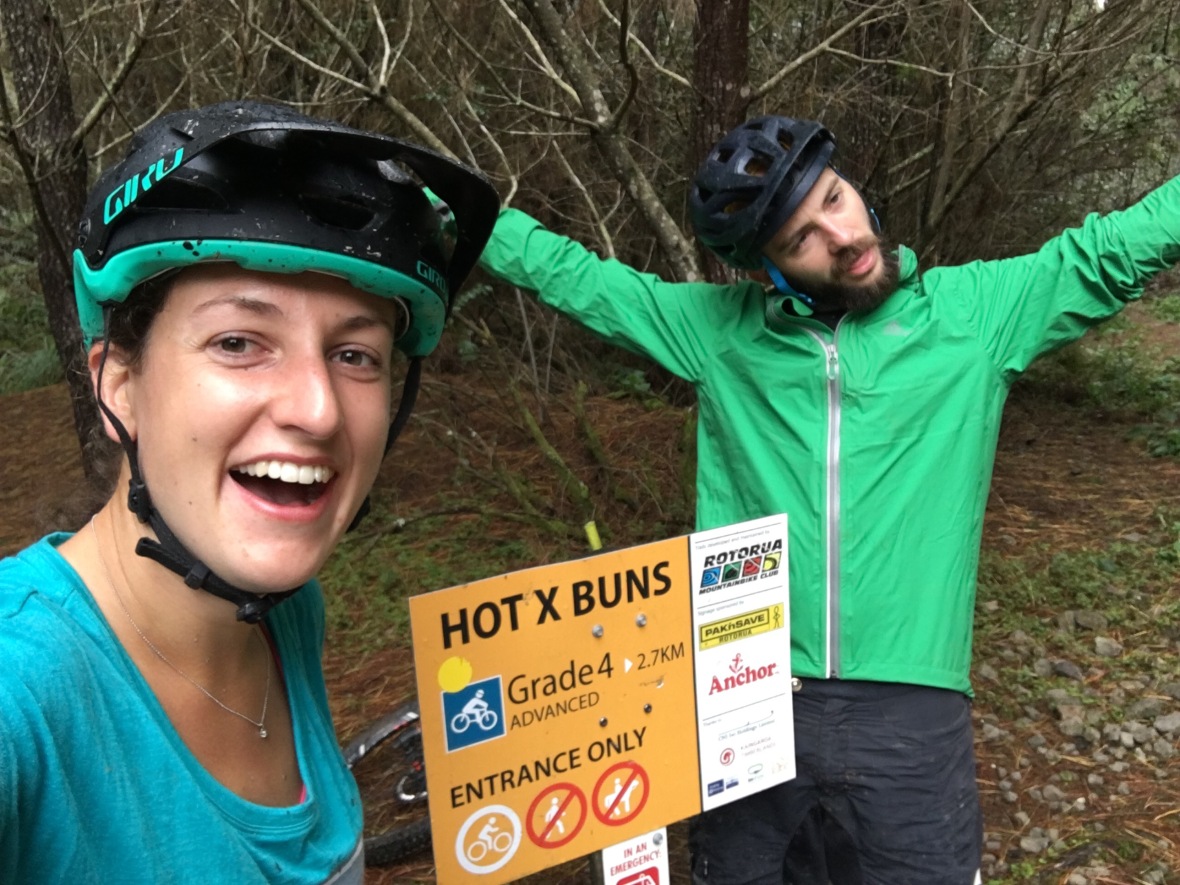 – the only hot cross buns we had this Easter!

We popped into the shops to get supplies for the following few days, and found what I thought would be the most amazing thing, salted caramel microwave mug cake! 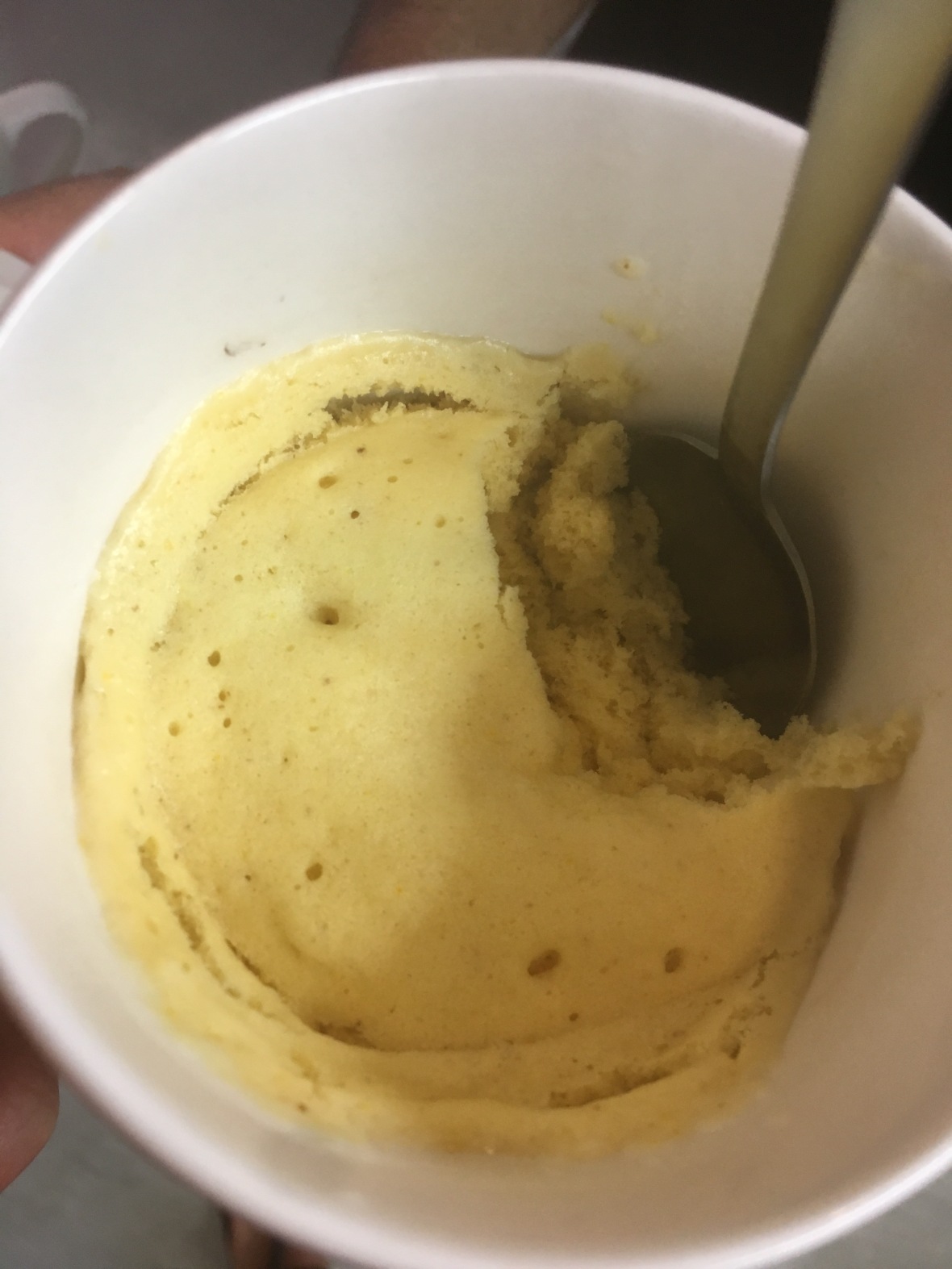 It was okay, but certainly no Mama Lee’s lemon cake!

The one perk of the rain, meant loads of rainbows

Easter Sunday was spent being good people and helping trail build (via James taking us to the wrong end of the woods, missing the shuttle to the top and having to cycle instead – never fear I had pleeeenty of sweeties to keep me going!)

We met some pretty sweet people who fed us cake and chocolate at the end as thanks for helping them build trails. Was rather therapeutic being on raking duty (the clever people knew not to give me a sharp implement!!) 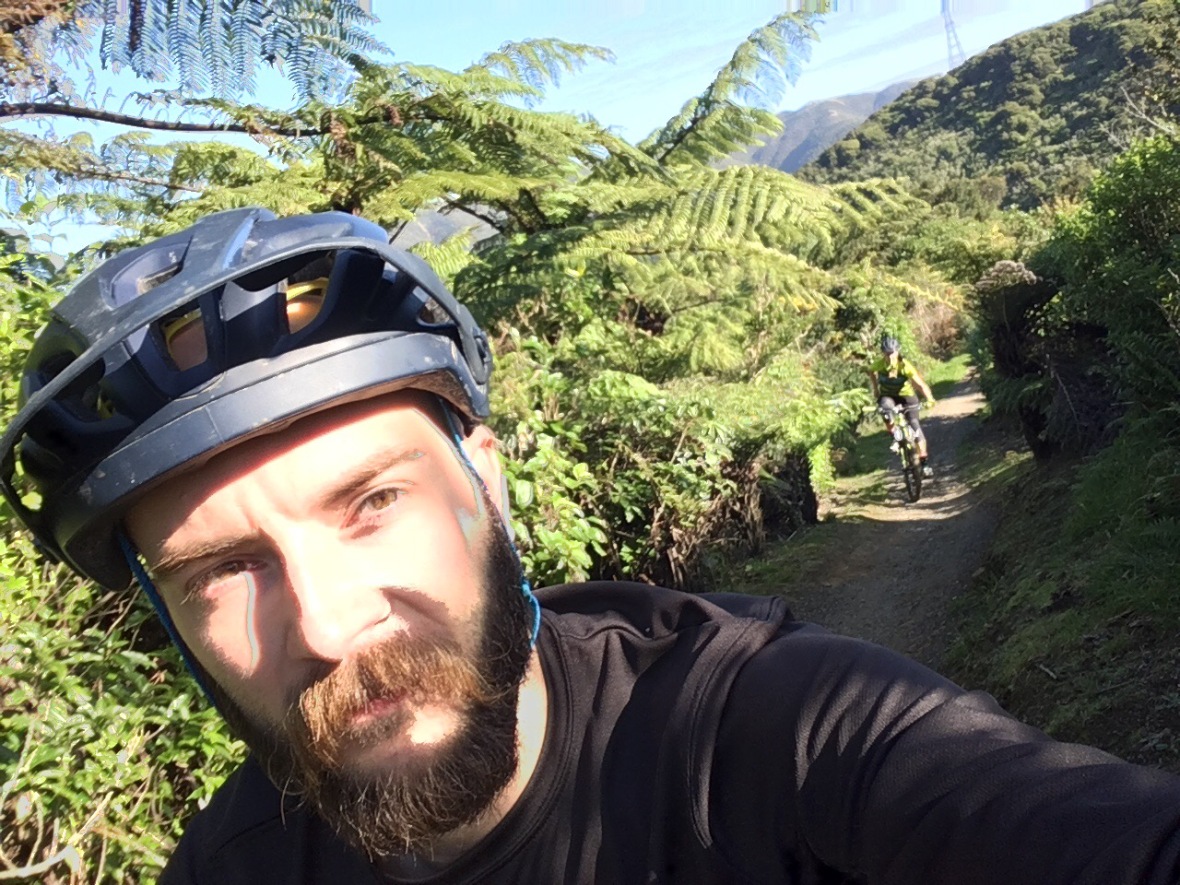 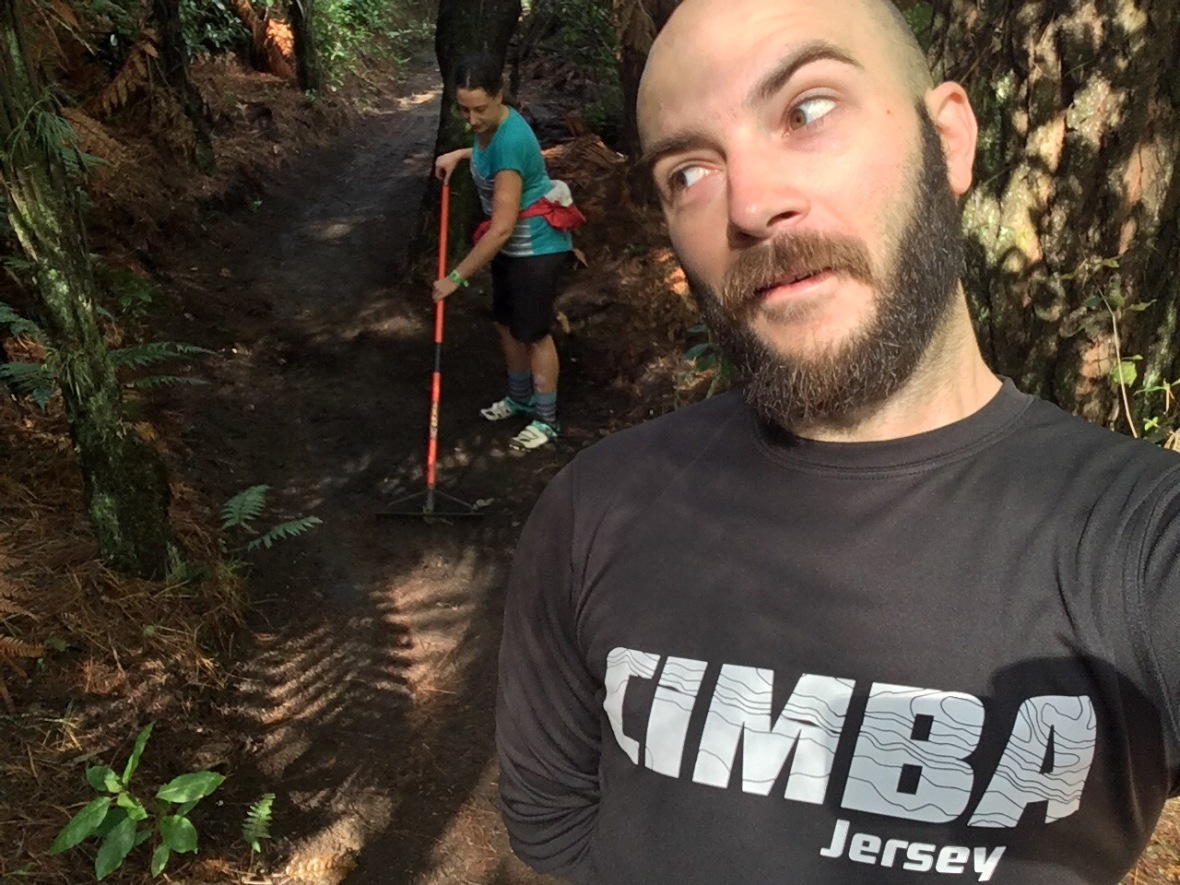 James, as always, managed to find a dog to befriend 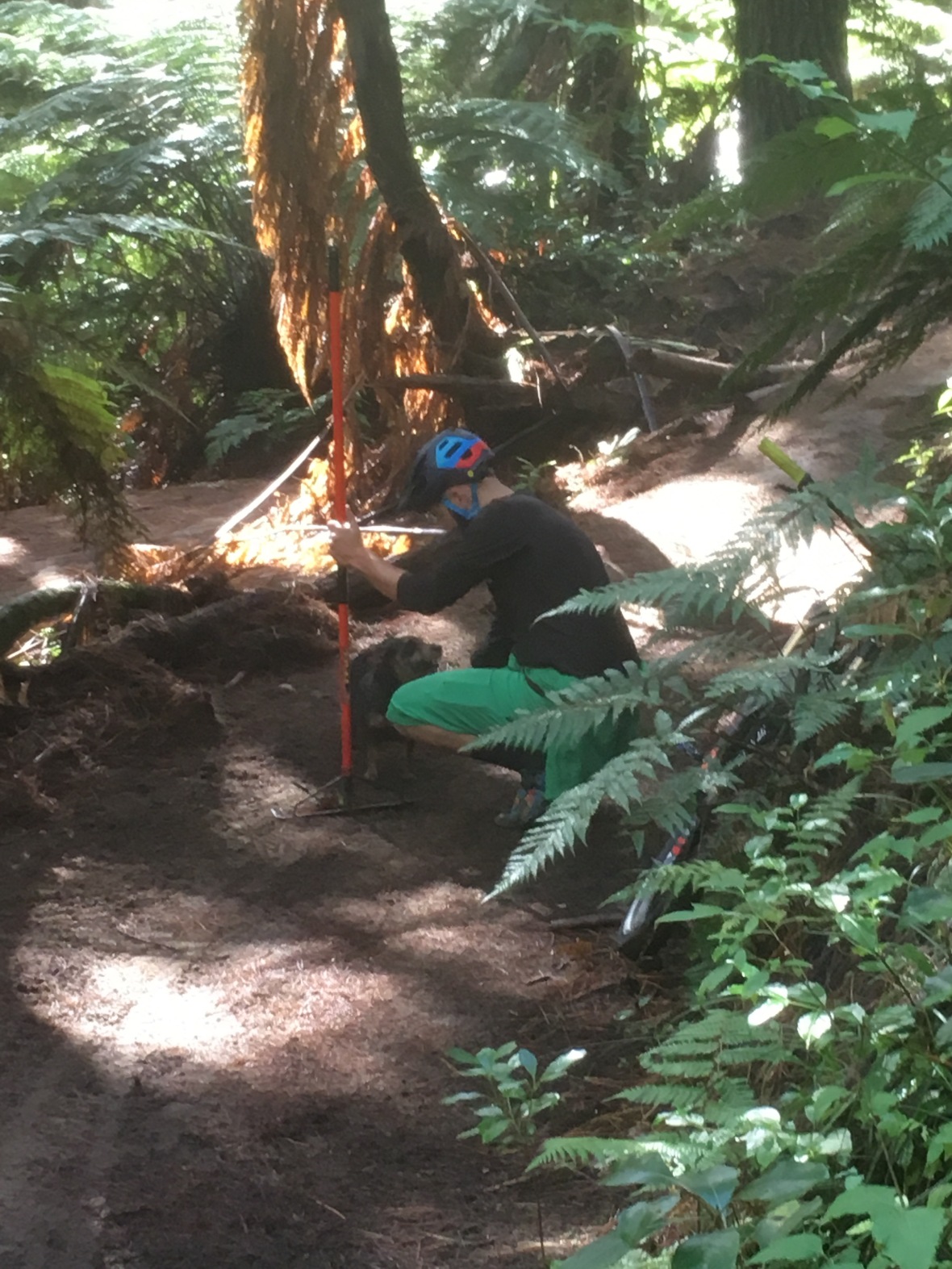 Sadly, Easter Monday came around too quickly meaning we had to return to Welly for work the next day.

The scenery en route was gorgeous, until we got about 1/3rd of the way and the heavens opened. So much so with the wipers on full blast I still couldn’t see where the road was (a little bit scary!) then we hit the bank holiday traffic, which meant moving 4K in ONE. HOUR. 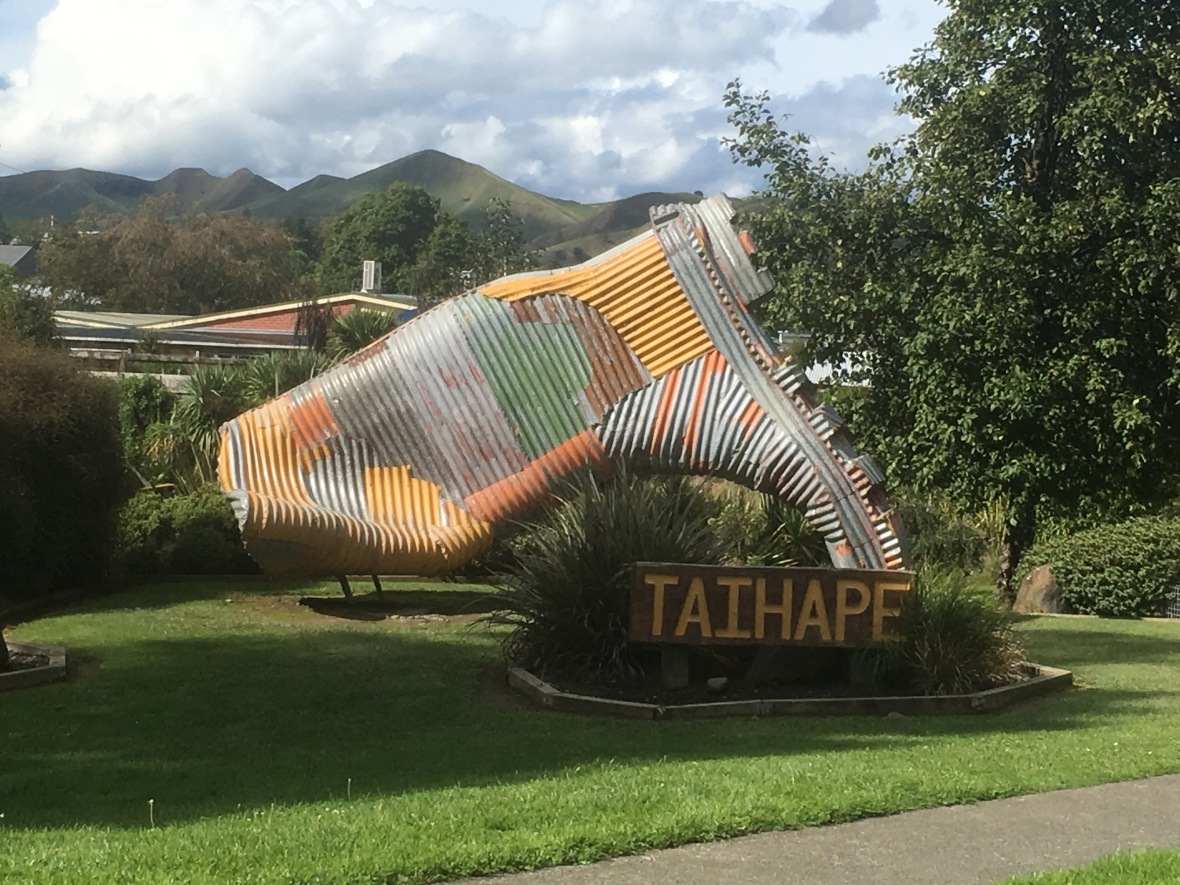 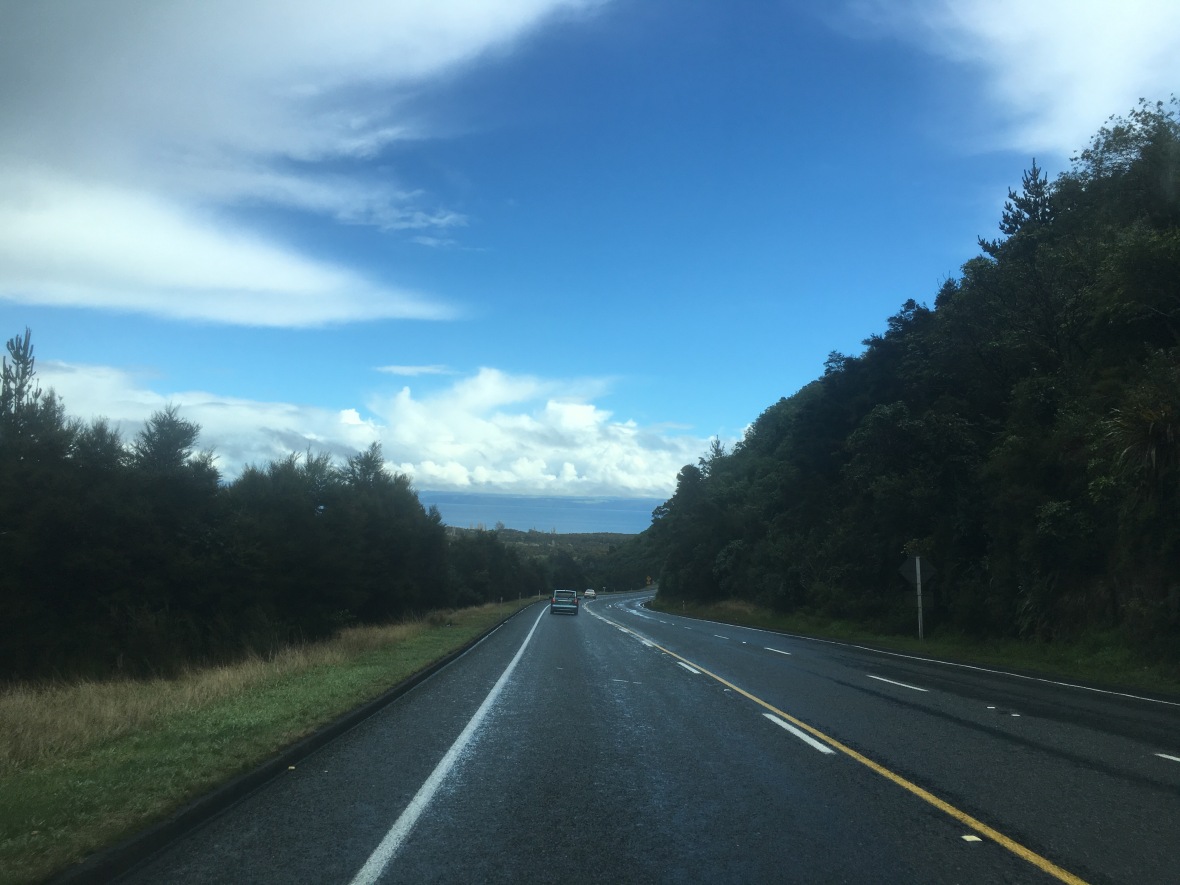 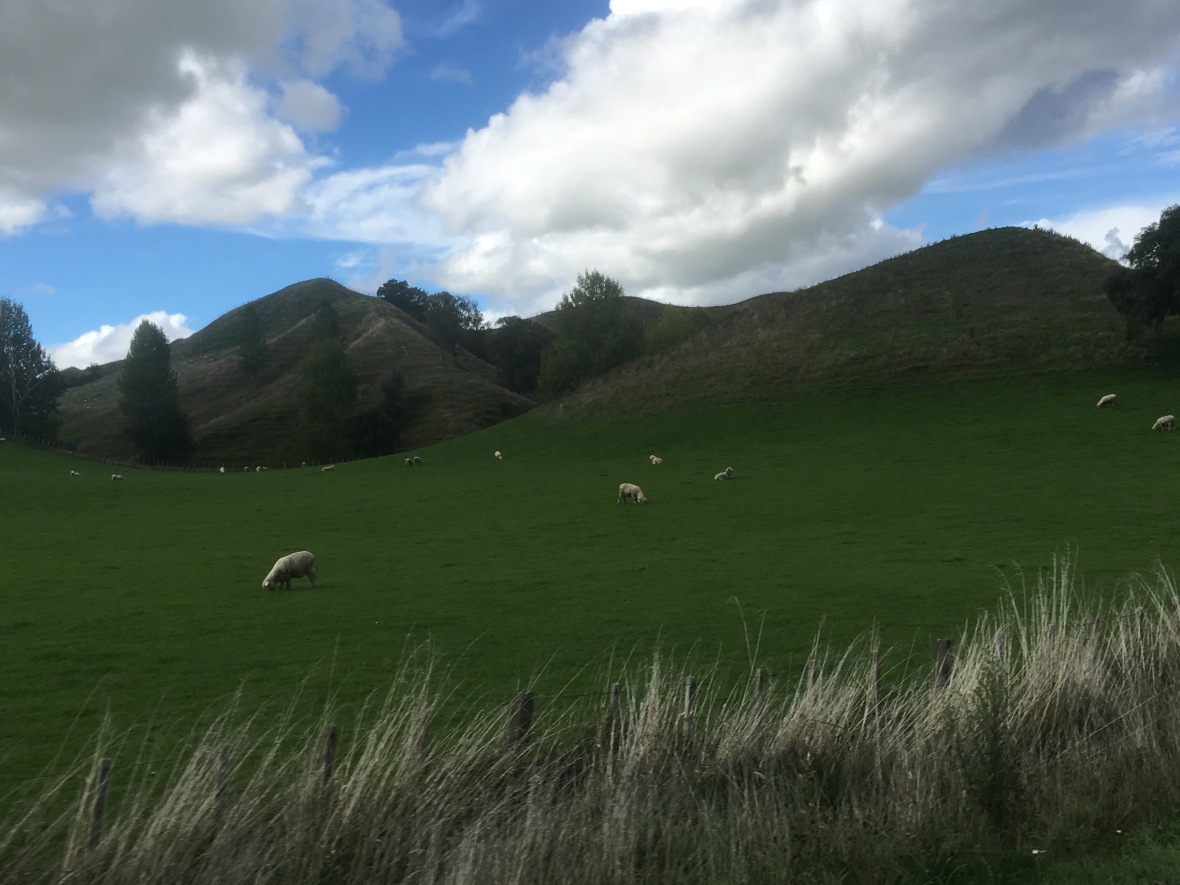 However, we were back ‘home’ and ready to rock ‘n’ roll